My Story's Buried at the Graveyard Rabbits Carnival.

The theme for this month's Graveyard Rabbit Carnival is "In the News". Write a blog post about something you read or heard in the news (recent or past) that pertains to a cemetery.

This month in the Vancouver area where I live there was a sad cemetery story - but not about a 'human' cemetery - it's about a pet cemetery in Surrey, B.C., the only one in the area here. Before the 1990s, some 600 pets were buried in this privately owned cemetery at an estimated cost of about $600 each for graves and headstones.

The cemetery land was later sold and the cemetery has since been neglected. Soon the land may be available for housing development.

There is still a restrictive covenant, but that expires in January of 2010. It's said that the developer offered to sell the land so that the cemetery could remain, but the price was too high.

This story has attracted a lot of comment locally and now it appears that there are at least 2 human gravestones here too - there might even be human remains. One stone, for example, identifies Murial L. Clerke as a corporal in the W.A.A.F. (British Women’s Auxiliary Air Force) who died in 1981, on the 16 August, aged 57.

Kevin Woronchak, owner of North Vancouver’s Until We Meet Again Pet Cremation Inc., is campaigning to save the cemetery. One solution would be to persuade the City of Surrey to make the area a public park. Kevin Woronchak can be reached at 604 - 924-1160. 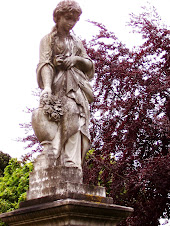